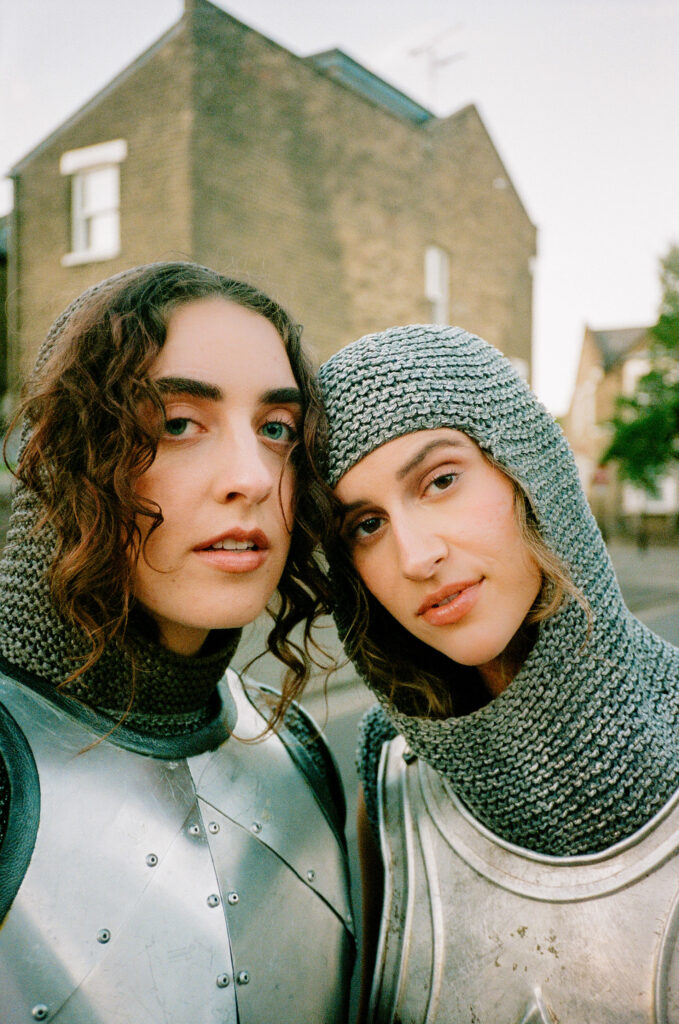 (Toronto, ON – July 27, 2022) – Rebellious candour, existentialism, and friendship are at the crux of what drives and motivates songwriter, producer and artist duo Wynter Bethel and Tessa Mouzourakis. How the band came to be was a series of sliding doors moments and necessity, with both women 5000 miles apart during the pandemic and having their hearts broken, again and again. Bonding over literature and lyrical precision, the name Tommy Lefroy was born out of Jane Austen’s real life Mr Darcy – the original 19th-century fuckboy Thomas Langlois Lefroy – a man who broke the author’s heart. The penny dropped when Tessa and Wynter thought: why can’t we be the strong female lead, and challenge literature’s traditional role of the male character: the heartbreaker? From meeting in Nashville in 2018 to continually crossing paths at house parties, when Tessa went to see Phoebe Bridgers’ supergroup Boy Genius play in her hometown Vancouver, she watched in awe and thought: “I want this, I can do this.” She posted a cover of their song “Ketchum, ID” on her Instagram story and Wynter responded: “Can we start a band?”. Both strong and “laughably existential” female characters in their own lives, and together, a musical powerhouse with an enduring soul connection, Tommy Lefroy moved to London and released their first single “Northern Towns” in 2021, followed by highly praised debut EP Flight Risk.

Pheromone Recordings are thrilled to officially welcome Tommy Lefroy to the roster (for Canada). Today, they release their brand new single ‘Dog Eat Dog’ – inspired by Joni Mitchell’s 1985 record of the same name – which arose from a conversation on societal expectations laid out for women, and the subsequent pressures we put on ourselves and our own desire. Having wholly self-produced their debut EP, this was the first time Tommy brought in a co-producer, Andy Seltzer (Maggie Rogers, Samia). On the track, they say:

“Dog Eat Dog is a song about relentlessness. It’s about how external pressures and expectations we have of ourselves can make us defensive, and keep us from going after what we really want. It’s about holding on to, what Patti Smith calls, “that fiery sadness called desire.” It’s about womanhood and sisterhood and queerness. It’s about keeping a sense of humour and humility throughout the hero’s journey. Andy completely elevated not only the sound but the joy we found in building this track. We went from moping about society to sampling swords (Tessa literally recorded herself sharpening knives in her parents’ kitchen) and laughing until we cried.”

The music video was shot with an all-female crew around London, including director Dominique Froud (Maisie Peters, Matilda Mann), and represents the guardedness all women feel walking through the world. Taking inspiration from strong mediaeval characters including Joan of Arc, the video shows Tessa going about everyday life, armoured up and feeling the strain of the mundane, until she runs into Wynter, also donned in a suit of armour, and sees for the first time someone else feeling the way she’s always felt.

“This was the first video we shot with somewhat individual storylines, as we felt it was important to represent how isolating these pressures and expectations can be. So much of this project has been us finding validation in each other upon the realization that we’ve had the same feelings and anxieties throughout our lives that maybe weren’t always openly talked about. That is what we hope to provide for the fans with the music. The armour was a fun way of visually representing the worries, the guardedness, the feelings that we have felt trapped in, and the important realization that we are not alone in it.” – Tommy Lefroy

Connecting with young female fans through perseverance, honesty, and lyrics that move you, make you cry and make you angry, the best friends have already won fans at NME, Apple and now have over 1 Million monthly listeners on Spotify. But seeing the tangible effect their music has had on fans this summer at live shows has blown Wynter and Tessa away, for a project that started over Zoom in a dark time when collective effervescence was taken away. With queues around the block for their performance at The Great Escape, Tommy Lefroy played their second London headline to a sold-out Lexington last month, with fans singing back every lyric from Flight Risk, and are set to perform at UK festivals this summer, including Barn On The Farm, Kendal Calling and Secret Garden Party.

Built as an anchor to get them through the uncertainty of 2020, the project has felt like an act of rebellion, against the constraints and expectations they had of themselves, derived from societal expectations of what it means to be a woman, especially in music. Capturing care-not independence in their lyrics and a do-all approach to their creative process they find inspiration from unapologetic female storytellers like poet, Anne Carson, as well as Joni Mithcell, Patti Smith and Phoebe Bridgers, and creative contemporaries Sharon Van Etten, Samia & Haim. As multi-intrumentalists and producers, they excel in sonically experimenting with the details of the world around them – from samples of the tube in their new home-city of London, to friends mid-laughter and clinking glasses around the kitchen table.

Uncompromising, beautifully honest, and refreshingly themselves, Tommy Lefroy is a perceptive voice for the malaise of modern living and an inspiration for the confident recklessness that comes with being a storyteller. The stories, written for each other, for their friends, and for the lovers who left, detail the storms of tearaway youth, stumbling in and out of love, and finding humour along the way.