What does the word “spirit” invoke in you? Does it inspire confidence, as in someone saying “that’s the spirit!”, or a team rallying together? Is it deeply personal, aiming for a spirit of reconciliation, or carrying a religious connotation? Perhaps you think of a group communing together, or someone reflecting in solitude. The dictionary defines ‘spirit’ as “the nonphysical part of a person, regarded as their true self and capable of surviving physical death or separation.” Dear Rouge offer up their newest record Spirit as an exploration of these ponderings and themes, as we all emerge from a season steeped in hardship and isolation.

Secluded away from the busy cityscapes, Drew and Danielle McTaggart took up residence in a lakeside cabin shortly after the release of PHASES, their stellar sophomore record. PHASES reflected on the paradox of their success in music whilst the ones closest to them weathered the storms of life. On PHASES, the duo wrote in studios all across North America with some of the most elite names in music. This time, the duo found themselves spending their days alone together and Spirit began to take form over the winter months. “I had this epiphany,” Danielle shared, “that we needed to come back to ourselves and the joy and comfort we found in each other when we began writing music together”. Her epiphany meant a return to vulnerability, honesty, the enjoyment of their own art and an authenticity in working with what’s true for you. Instead of seeking out high brow co-writers and listening to too many outside voices, Danielle felt compelled to hear those already closest to her.

On Spirit, Dear Rouge turned to the ones that had been there all along: their bassist Jordan Kern, longtime collaborator Ryan Worsley (GUS, Mathew V), Broken Social Scene founder Brendan Canning, close friend and drummer Daniel Klenner (Peach Pit, We Are The City), pop-star and former tourmate Lights, and the most intimate pairing of all, each other. The only invitation to an outsider was extended to producer Thomas D’arcy (Neko Case, July Talk, The Sheepdogs), who felt like an insider already, given his close friendship with several of those already in the “inner circle”. Leaning out the writing and production team allowed the most vulnerable and raw side of Danielle’s inner thoughts to shine through. Spirit is the line being thrown from these questions and deep reckonings, urging you to grab hold and hang on for dear life.

Dear Rouge aren’t content to simply ask the lofty questions either. These finely crafted alternative tunes are a confection to the ear, but a glimpse below the surface reveals ideas and answers, while being deeply aware of our human fallibility. Record opener “Facedown” signals the immediacy of the band’s new work. Within the first minute, Danielle commands all of us, “Left to right, come on, open your mind,” a message that could be applied to a crowd at a show. Yet also every person on the current political spectrum needs to take note of her message. This isn’t blind optimism either, as she notes shortly after, “It might get a little ugly”, an inconvenient truth of trying to unify the masses. “Small Talk” asserts how the reality of the world right now has changed our needs, as we are all aching for authentic connection. We don’t have the time or space for “cheap love”. They plead outwardly for the energy to continue onward and upwards in “Gimme Spirit”. This is an especially important plea given that the song title is the defining essence of both the band and of Danielle herself. On the aptly titled “Fake Fame”, Dear Rouge makes short work calling out the overinflated socialite influencers we see across our media. Danielle spits out “I don’t want your fake fame!” with palpable bitterness, the latter word stretching out like an elastic before snapping into a chanting chorus melody. “Heavy Hearts” is a reflection on simpler times, and all that’s been, but there is always a new beginning. We are encouraged to draw from all that is positive to gird our spirits for battle, whether that be passion, power, or faith. Tracks like “Way Down”, “Relationship Problems”, and “That’s It That’s All” beautifully articulate the complexities of anxiety, pain, and existentialism amidst simplistic melodic lines and ambient textures.

The heart of the record is “Dream Dreamer”, with its pondering mantra “Born here to burn, where am I now?” Danielle asks the listener to consider what that fire is for them. “It’s a bit of a bizarre idea, but I think it’s a positive that we are born to burn, so-to-speak,” she reflected. “We are born with this flame within us to love, create, and make our mark here. The last two years have been incredibly challenging; to my health, to the world at large, and also feeling like some of my own dreams were crushed. I had to get that emotion out, to become open-handed again. Maybe the answer is to replace cynicism with hopefulness; to keep the dream alive no matter what and “give everything that I have to see it”, while still acknowledging the fear I have, both of failure, but also that dreaming can make you an outcast.” Danielle confesses that, “If there’s a dream, I’ll be the dreamer”, admitting that her head can be up in the clouds. But “Life Goes By” brings her and us crashing back down to earth again. It underscores the monotony of day-to-day existence, with the all too familiar realization that you are somehow falling behind, even as you try to keep up and still love the old authentic you that existed before you felt the weight of life, when you were still just on the periphery of life’s hardships.

Spirit is a different avenue of sound for Dear Rouge. Along with these raw individual reflections, the duo strove for a more grassroots approach to the instrumentation. Acoustic guitars from the tracks’ demo stages remain audible. Songs written on piano are kept to their instrument of origin, instead of being replaced by synthesizers. Rather than opening a computer, Dear Rouge and Thomas D’arcy utilized Hammond organs, strings, and glockenspiels to create atmospheric elements. It’s all still distinctly Dear Rouge, but more personal, more vulnerable, and more intimate.

Spirit is a call to live a freer, more courageous life. It’s a battle cry, and the cover art reflects the traces of the fight on Danielle’s face. Spirit is an inspiration to its listeners to be bold and brave; to foster, to create, to encourage and to celebrate ourselves and others. 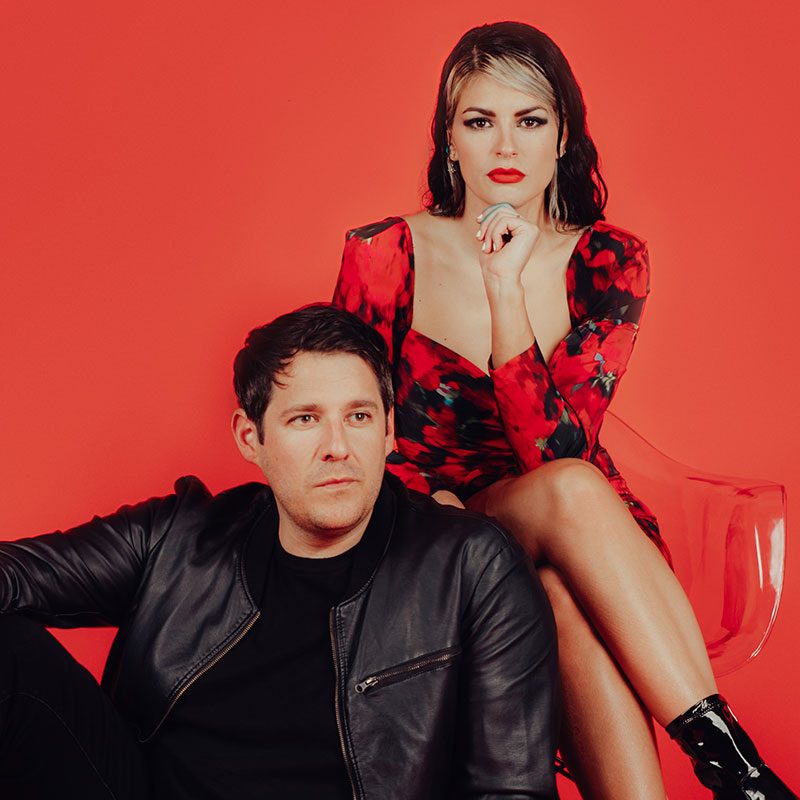